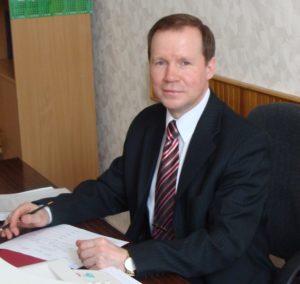 Dean of the Faculty of Information and Analytical Technologies and Management, Member of Academic Council, Member of EMC, Member of the Coordination Council of the NURE Alumni Association, Professor Department of Higher Mathematics, IEEE Senior Member, Doctor of Physical and Mathematical Sciences, Professor

He was one of the performers of state budget research projects: “Development of analytical and numerical methods for studying electromagnetic phenomena in active media” (order of the Rector No. 2kn dated 06.01.2001), “Investigation of the formation of pulsed fields by excitement of broadband antenna systems” (Joint Protocol for the MES number 2 dated October 30, 2001).

2001-2002- executor of the joint project of research and technologies “Ukraine-Greece” with the University of Athens, Athens, Greece: “Formation of high-power pulse electromagnetic fields through the excitation of ultra wide-band antennas by relativistic electron beams”. Contract by the Resolution of the Ministry of Education and Science of Ukraine No. 312 of 13.04.01.

1999-2004 – member of the editorial board of the Journal of Applied Electromagnetism (the University of Athens, Athens, Greece).

Since 2006 – Senior member of IEEE Antenna and Propagation Society.