History of the Department

The Department of Higher Mathematics exists from first days of creation of institute. The data which has remained in archive concerns the post-war period.

Since 1944 heads Department of Prof. Tits Alexey B. A hereditary nobleman, has ended physical and mathematical faculty of the Petersburg university with the diploma of 1st degree in 1917 and has been left at chair of geometry of Prof. N.M.Gjuntera.

Since 1957 to 1963 Prof. Livshits Michael S. headed Department. Has ended the Odessa State University in 1938 the Basic area of scientific activity – the theory of operators and their application. The author of the monography: ”Operators, fluctuations, waves. Open systems” (1966).

Since 1965 to 1968 Prof. Gluskin Lazar M. managed Department. In 1939 has arrived on physical and mathematical faculty of the Kharkov state university. In May, 1942 war interrupts L.M.Gluskina’s study, and it leaves on front where serves as the commander of a platoon, companies, batteries, participates in war with Japan. It is awarded the order the Red Star and medals. In December, 1946 renews study in KhNU. Under the direction of A. K. Sushkevich has begun research work in the field of modern algebra. In 1952 L.M.Gluskin has protected the master’s thesis “About homomorphisms associative systems”, and in 1961 – doctor’s “Semigroups of transformations”. L.M.Gluskina’s basic results are connected with the theory of semigroups. It in essential degree promoted formation of this theory and its transformation into independent area of modern algebra.

In 1968 the management of Department was incurred by L.M.Gluskina’s worthy successor, Prof. Berman Samuil D. Begun by it in 1939 study on мехмате the Moscow state university has been interrupted by war. Since 1942 S.D.Berman at the front. In the beginning of 1943 seriously injured in fights under Stalingradom. After S.D. Berman’s treatment again at the front. As a part of armies of 3rd Ukrainian front has taken part in clearing of Ukraine, Bulgaria, Chehoslavakii, storm of Budapest and Vienna. It is awarded the order a Patriotic War, a medal “For courage” and other medals. After S.D. Berman’s demobilisation has come back to the study interrupted with war. In 1949 has ended with distinction the Lvov university, in 1952 has protected the master’s thesis. With 1952 on 1967 worked at Uzhgorod university, has created there chair of algebra and became the founder of strong algebraic school. In 1963 S.D. Berman has protected in Moscow the thesis for a doctor’s degree devoted to indecomposable integer representations of final groups.

Sarnavsky Nikolay G. (1939 was the nearest employee S.D.Berman’s on chair – 1994) which has headed chair in 1973 In 1966 has ended NURE, in 1970 postgraduate study, since 1970 – teaching activity as the assistant, the senior teacher, the senior lecturer. Since 1973 – managing higher mathematics chair. Its scientific interests are various: it is mathematical calculation and the analysis of various parametres of cable lines for deep chinks, the mathematical theory of colour sight, predicates on sets, the theory of coding and абелевы groups, threshold functions and many other things. Nikolay G. has proved the talented organizer, has managed to rally chair and to strengthen its position in institute structure, a lot of attention gave to methodical work (has published methodical instructions at the rate “Algebraic structures and their application” in 2 parts) and educational process. The unexpected death has prematurely torn off a life of this uncommon person, without having allowed to reveal up to the end to its talents. 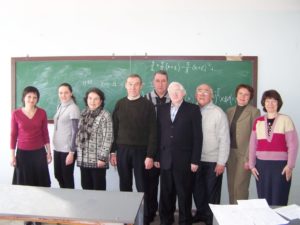 Since 1994 supervises over Prof. Nerukh A.G. uncommon the scientist and the teacher (reception of grants of Sorovsky fund in 1993 and 1996, an honorary title of the Sorovsky Senior lecturer of the International Program of Soros Nauki and Education of the International fund of the Renaissance). A.G. Nerukh conducts the big scientifically-methodical activity, is the co-author of the manual “the Course of lectures on linear algebra and analytical geometry” for students of HIGH SCHOOLS, the author more than 200 scientific works in abstract magazines, the co-author of the monography “Modern problems of non-stationary macroscopical electrodynamics” (1991). Under its management 8 master’s theses have been prepared and protected. Prof. A.G. Nerukh – a member of Specialized Council about protection of theses for a doctor’s degree on the radio physicist. Prof. A.G. Nerukh has obtained the international recognition of the scientific and pedagogical merits: it is included in the collection “Who” s Who in the world” (1998) The American biographic institute, is a member of International professional society IEEE. Under its management the Department collective carries out serious scientific researches on a state budgetary theme: “Working out of mathematical methods of processing of pulse electromagnetic signals in active environments”, is conducted the big work under the edition of the uchebno-methodical literature.